Things to do
Places to Stay
Explore
Events
Featured “Downtown was built on the arts,” said Devney Preuss, president and CEO of Downtown Phoenix Inc. “Large-scale public art pieces like this are important because they contribute to Phoenix becoming — and being known as — a creative city.”

“It’s exciting for lots of reasons,” El Mac said. “I think we both kind of see it as this monument for the city, and something that’s representative of the history here. Phoenix always seems like it’s been searching for its identity, so we’re doing our little part to help with that.”

The central image is a black-and-white portrait of a real-life teenage girl from Phoenix’s Salt River Pima-Maricopa Indian Community. She’s holding a red rose, in color, which matches the soft red and terracotta hues of Breeze’s diamond-shaped detailing around the image.

“The collaboration between Mac and I is something we’ve been talking about for quite some time,” Breeze said. “We’ve known each other for over 20 years, but have never been able to work on a collaboration of this scale. We wanted to create a monumental work as an additional gift to the already-evolving landscape of murals in downtown.”

Spearheaded by ViaWest Group, which owns the building with joint-venture partner GEM Realty Capital, an open call to artists by Artlink Inc. went out in March 2019.

“ViaWest is honored to be able to collaborate with Downtown Phoenix Partnership and Artlink to bring this amazing mural by internationally-renowned artist El Mac, and Thomas “Breeze” Marcus,” said Danny Swancey, partner at ViaWest Group. “So excited to be able to enrich our city and community through public art.” 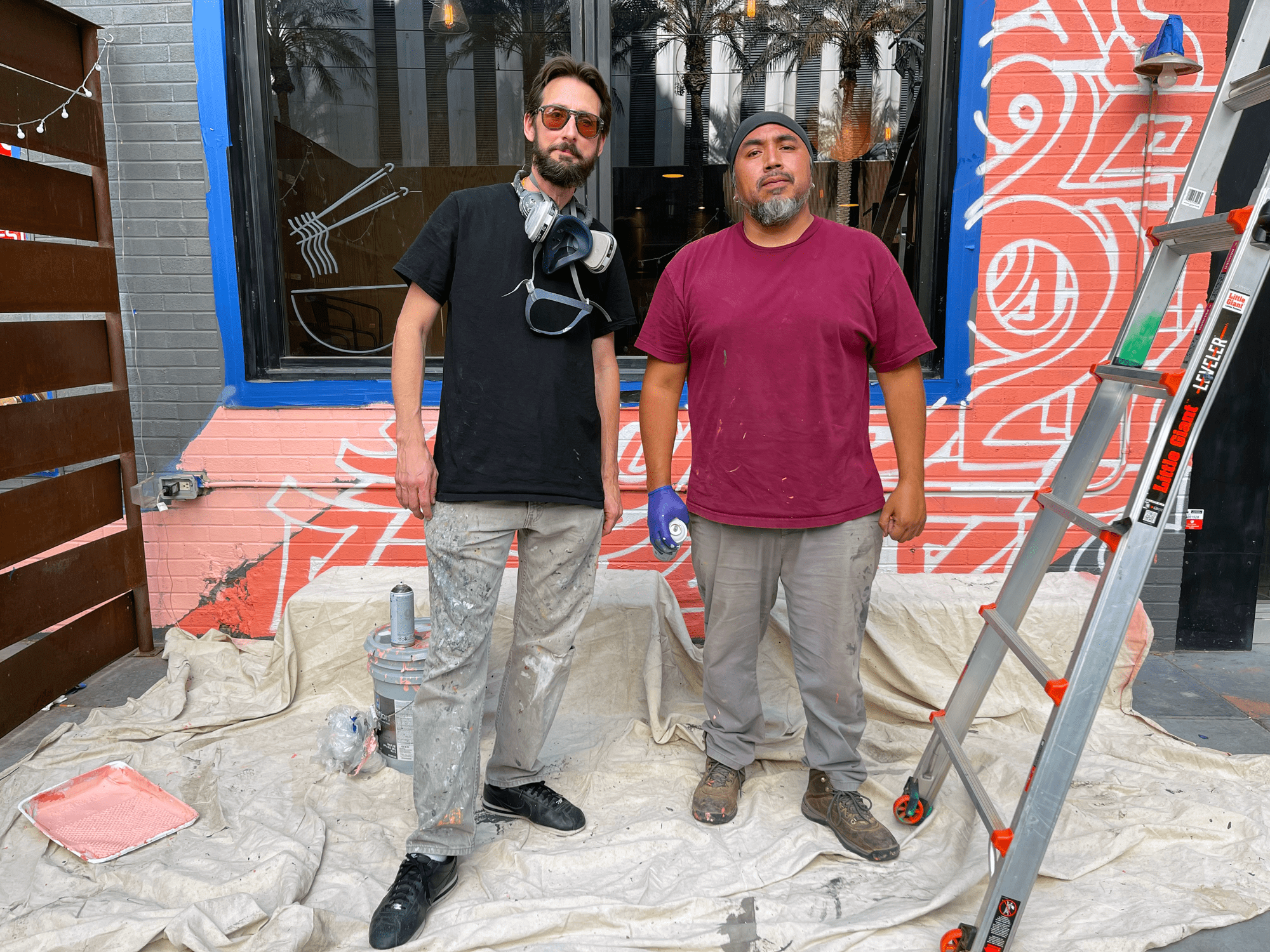 Thomas “Breeze” Marcus (right) and Miles “El Mac” MacGregor won the Artlink Inc. public call to artists for the project in 2019, and the project was postponed until spring 2021 due to COVID-19. (Photo: Fara Illich via Downtown Phoenix)

When the call went out two years ago, El Mac and Breeze applied as a team, and after winning the call, worked with ViaWest to create something that was “warm, whimsical and represented the younger generation.”

There is a lot of symbolism and planning that went into the piece, according to Breeze. From the color selection, to the spacing, icons, lines and texture, everything is very intentional and tells a story. For the portrait inspiration, El Mac said he likes to use his own images, and wanted to find somebody local.

“It doesn’t get much more local than having a young person from the Salt River Pima-Maricopa community,” Breeze said. “To have a young person painted and represented in this way, right in the heart of downtown, is only fitting. This is the homeland of that tribe.”

Four different Native girls were photographed as possible images for the mural, and the one who was eventually chosen doesn’t yet know her image was selected. Breeze and El Mac said they hoped to surprise the young woman and her family once the mural was complete.

“When a beautiful canvas on a historic building is provided to an artist team like this, their self expression becomes one with that of the city itself,” said Catrina Kahler, president and CEO of Artlink Inc. “It’s thoughtful, bold, hopeful and fearless.”

Breeze himself was born and raised on the Salt River Pima-Maricopa Reservation, just east of Scottsdale. Stylistically, Breeze’s artwork is composed of free-hand, tight line work that is organic and intricately interwoven — with indigenous influence, “but done in a more contemporary way.” He said it’s reminiscent of the coil-woven baskets and geometric designs of his Akimel and Tohono O’odham heritage.

Born in Los Angeles, where he currently resides, El Mac was raised in Phoenix. He began painting and doing graffiti in the mid-‘90s, and since that time, developed his unique portrait aesthetic. His work draws on influences from classical European art, social realism, symbolism and devotional art, as well as the Chicano and Mexican culture he grew up around.

“Considering it’s in the heart of the city, right in the heart of downtown — just by its location alone — it’s significant,” El Mac said. “Even though I’ve been living away for a while now, my family is still here, my friends are still here — it’s always going to be home. To have a really nice mural like this in such a nice location, it means a lot.”

The mural was completed Monday, April 5. Come Climb With Us! Explore The Fun This Summer!